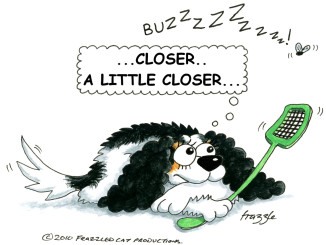 Fly Catcher’s Syndrome results from a brain wave disturbance. So-called Fly Catcher’s Syndrome is a variant where hallucinations cause the dog to leap and snap at imaginary objects, as if flies were in front of their nose. Some affected dogs may compulsively chase their tails or act as if their ears or paws are irritated. Episodes may last for several hours or in severe cases constantly.

Fly Catcher’s Syndrome has also been identified as a symptom of Syringomyelia it has also been associated with another disorder ‘Idiopathic asymptomatic Thrombocytopenia’ (Blood Platelets) and Epileptic Seizures.