Next time your dog engages in some puzzling behaviour, whether it’s barking for no reason, or ignoring you at the park, he might not be trying to irritate you – he’s just responding to a different level of senses than you are. Take a moment to look around and try and figure out what’s triggering his behaviour. Your dog could be trying to tell you something!

The Sniff is not to be Sniffed at! 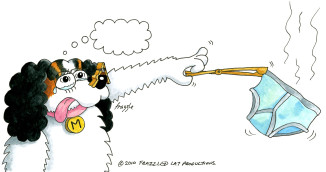 We can’t even come close to our dog’s ability to smell things. It’s been estimated that a dog’s sense of smell is 100,000 times more powerful than a human’s. Scientists think that humans have about 40 million olfactory receptors, versus 2 billion for your dog! That’s part of the reason dogs make such good trackers, and can trace scents across all sorts of distractions – like across roadways or through dense woods. 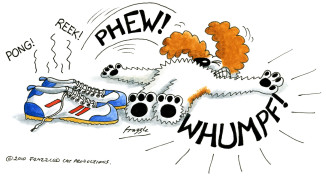 Dogs also use their sense of smell as a communication tool – when they’re running around the park with their nose to the ground, sniffing everything in sight, they’re actually reading the calling cards of everyone – dogs, humans, cats, squirrels, and anyone or anything else, that has been there before him. Which is why he may not pay attention to you when you first get to the park – he’s trying to see if any of his friends have been there before him!

A dog can detect a teaspoon of sugar diluted in a million gallons of water (two Olympic Sized Swimming Pools). 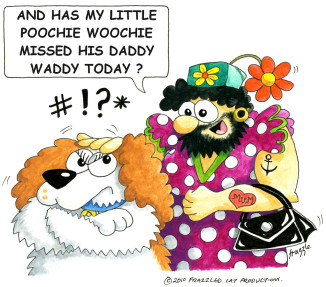 When we return home at the end of the day, our dog will greet a cocktail of stink, yes you!

According to your lovely little Cavalier, Humans Stink:  Our body, our skin is regularly churning out fluid and oils holding our particular brand of scent.  Trained dogs can tell identical twins apart.

If we came home after bathing in unfamiliar perfume or wearing someone else’s clothes we might expect a moment of puzzlement, it is no longer us –   but our natural effusion will soon give us away. 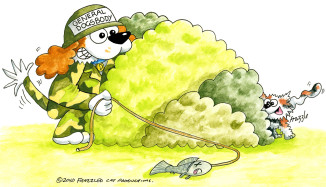 It was once thought that dogs were “colour-blind” – only able to see shades of black and white with some grey, but scientific studies have found that’s not true. Dogs can see in colour – ranging from blues and greens to greys and crèmes, and of course, black and white. It’s been estimated that humans can distinguish somewhere between 7 and 10 million different colours (we don’t even have names for that many colours!).

But dogs have it all over humans in detecting motion – that’s one reason they can detect a cat up a tree at a much greater distance than you can! And their night vision is typically better than ours – dogs have an additional reflective layer in the eye called the tapetum lucidum, which reflects light back into the receptor cells of the eye, which not only increases their night vision, but gives them that spooky appearance. 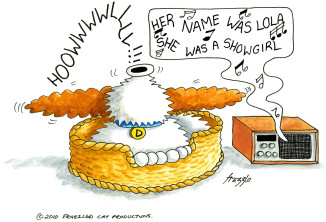 When your dog is barking like crazy in the middle of the night, don’t just assume he’s lonely and wants you to get up and keep him company. He may be listening to something that you can’t hear, that’s extremely upsetting to him – like a burglar breaking in your basement window.

Dogs can hear at four times the distance humans can – that means you might hear something from a 100 yards away your dog could hear from a quarter of a mile away. Their ears are also better designed to gather more of the available sound wave – they have 15 different muscles that move their ears in all directions, plus they can move one ear at a time – and independently of the other to absorb even more information. 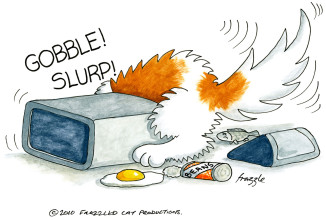 Just as with humans, taste is closely linked to the sense of smell – the main difference is humans won’t eat something that smells bad; while dogs are the opposite – the smellier the better. Dogs will gulp first and ask questions later.

While humans  won’t eat something that doesn’t look appealing, let alone doesn’t smell good, dogs are more concerned with smell, than taste. They frequently gobble down food before they have time to chew it, let alone taste it. But that’s ok – it’s why when we clean out our refrigerators our dogs think it’s time for treats. 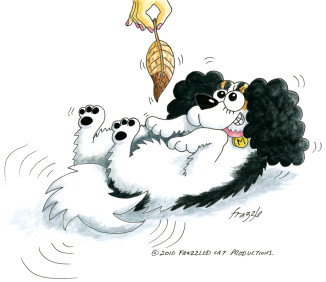 Dogs also have a well-developed sense of touch, surprising perhaps under all that fur, although this sense is much less sophisticated than a human’s. Puppies are born with sensory receptors in their faces so they can find their mum even if they’re separated before they open their eyes.

But they also can sense touch all over their bodies, just as humans can. One reason your dog flops down on the couch next to you and tries to snuggle up on a hot day (or any other day for that matter!) is because he likes the comfort of feeling that you’re right there! 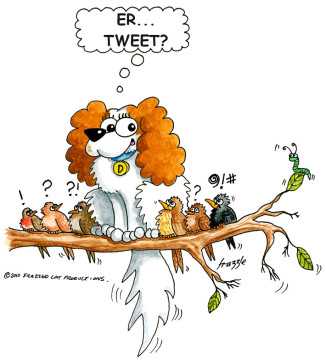 Some Cavaliers have been known to exhibit traits in common with cats, such as perching in high places (the tops of couches, the highest pillow, etc), cleaning their own paws and can also show some birding qualities.

Cavaliers have been seen to catch small birds in mid-flight that are flying too close to the ground. Cavaliers like to sit on laps and are very affectionate and quite often like to be cuddled.