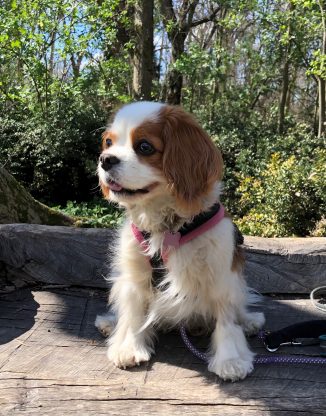 Every dog is perfect to their owner but Mia really was a once-in-a-lifetime Cavalier.
A dainty little girl with the most lovely character ever: sweet, friendly, brave, happy, self-confident, fearless, amusing… she was just in love with life itself and she lived her life to the fullest. 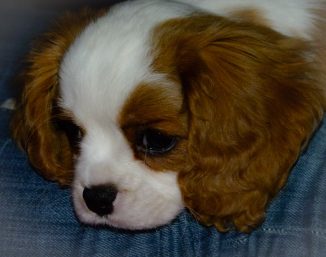 Mia loved anyone and everyone and was always happy to make new friends: people, dogs and all little animals. When she found a wounded little bird fallen into the hedge her reaction always was to approach, smell and then lick it very gently. I never saw in her behaviour the intention to hurt. She was friendly to cats, squirrels and little birds. She was in love with everybody and not even an attack by a German Shepherd when she was 5 months old could change her faith in others and her enthusiastic approach to life. But I guess that most of all… she loved food!

She had the most beautiful and expressive big eyes; she could really communicate with her eyes even if she didn’t hesitate to emphasise some of her intentions or wishes (especially the desire for food, of course) with a pretty loud bark! 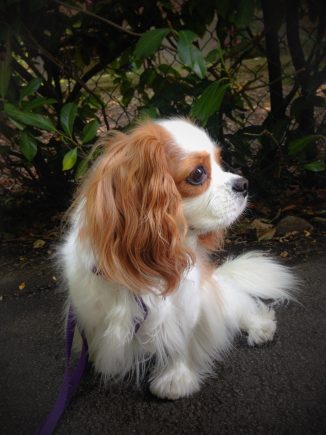 Mia was very fortunate to have a fabulously healthy heart. Year by year her Doppler echocardiography always showed a perfectly healthy heart with no sign of a murmur until she was 9 years old. I thought she would live a long, healthy and happy life but, sadly, I didn’t consider gastrointestinal issues.

Mia had her first pancreatitis attack when she was 5. At the time it really seemed that she overcame it amazingly well but further ultrasound check-ups showed in the following months that the attack left fibrosis in the pancreas and pancreatitis became a chronic issue so we were referred to a specialist. Mia was put on digestive enzymes, probiotics and a low fat diet. Things seemed under control for quite a long time despite two mild flareups. She was still so lively, happy, greedy and cheeky. 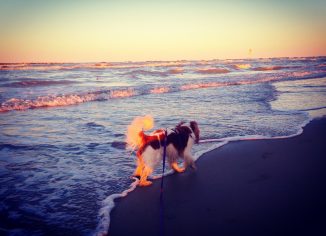 When I was thinking that her health was finally under control, Mia started suffering from frequent urinary tract infections (UTI) that the gastroenterologist treated with antibiotics and supplements. Unfortunately she had repeated relapses and it seemed impossible to eradicate the UTI. I was feeling frustrated and concerned by my Mia’s health so I asked the gastroenterologist to have Mia checked by a nephrologist (kidney/urinary system specialist) whom carried out blood and urine tests and a ultrasound. This was October 2020. 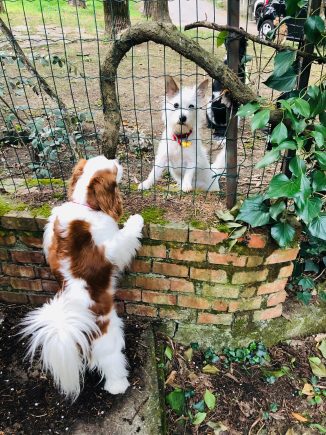 The nephrologist looked immediately concerned by the ultrasound imaging of Mia’s bladder; it looked pale grey instead of black. It was literally full of hyperechoic material but that wasn’t all… the nephrologist told me she suspected a bowel disease as the cause of Mia’s frequent UTIs. The small intestine looked very inflamed, indicative of leaky gut syndrome. In the nephrologist’s opinion, bacteria and other intestinal material was leaking out from the intestine and going through the nearby bladder wall, causing infection. The specialist also saw stones in the gallbladder. 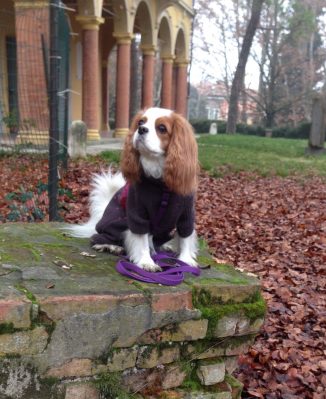 I was so shocked… Mia had been under the care of a specialist vet for over a year and despite many ultrasounds and blood tests, they had never fully established what was happening. I was very upset and immediately looked for another specialist, and thankfully quickly found one. He was highly qualified and experienced and agreed to investigate Mia’s gastrointestinal issues, planning extensive testing.

But one morning, just before starting with tests, Mia got sick. She was weak and started refusing food. I rushed her to the clinic and after some tests the specialist told me she needed surgery to remove the gallbladder as the stones had started causing problems.

Mia underwent surgery and came through it brilliantly. She was such a strong girl! It seemed that nothing could stop her and we started calling her WonderMia because of her strength and courage. We decided to give her a little time to fully recover from such major surgery and then start the investigations. 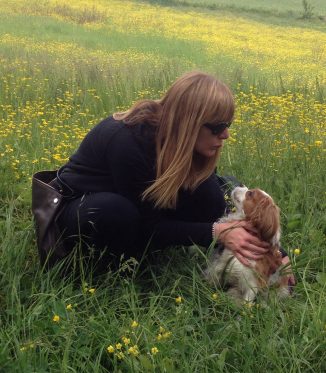 About one month later, just after Christmas, I noticed she looked thinner, I was sure she had lost weight in only a month so I called the internist again and he decided to immediately run some tests. Blood tests showed that chronic pancreatitis had turned to Exocrine Pancreatic Insufficiency (EPI) and her protein levels (especially albumin) were low. Ultrasound showed a concerning inflammation to her small intestine. The specialist told me he wanted Mia under endoscopy as soon as possible as he was suspecting Protein losing enteropathy (PLE) and he needed a clear picture of the organ in order to start the most suitable treatment. 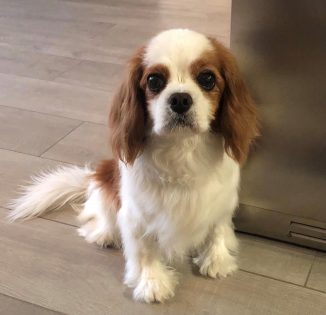 It’s very important to make the right diagnosis to commence the most appropriate treatment. The therapy has the purpose of maintaining the oncotic (osmotic) pressure at a adequate level to prevent the complications of PLE, guaranteeing nutritional support and treating the primary disorder when possible. 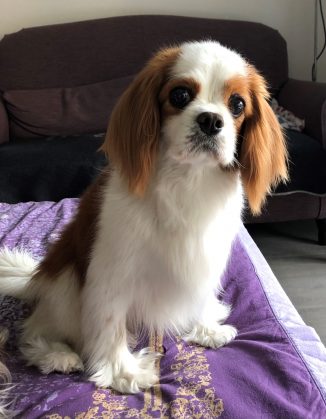 I must confess that at that time I wasn’t 100% sure what was happening as I had never heard about PLE before but I agreed to go ahead with endoscopy to Mia’s stomach and intestines. Mia came through the procedure under GA brilliantly as usual (she was still WonderMia!) and samples were sent to the Royal Veterinary College in London.

The biopsy results were shocking: not only were PLE and IBD confirmed but they were
very severe. Mia’s PLE was graded 23 (24 represents the most severity). The
specialist said it was the most severe case he had ever seen. Despite this, Mia was surprisingly almost asymptomatic (good appetite, stools looked normal, she was happy and lively). 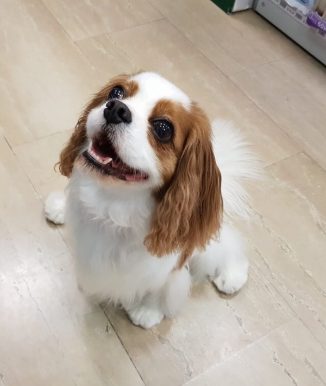 The only symptom she started showing about one year earlier was hair loss, especially of the ears. I remember I was pretty obsessed by the change in her ears; once long and thick they gradually became poor and thin; not for aesthetic reasons only of course but because I was getting worried that the loss was the sign of underlying health issues. I asked that question many times, to her former specialist and to some friends in the Cavalier world but they didn’t pay much attention to it and said it was very likely related to the fact that she was a senior now. But my sixth sense was right: the intestine wasn’t absorbing enough nutrients to nourish the coat because of PLE. Now everything fitted together and we finally had a diagnosis. 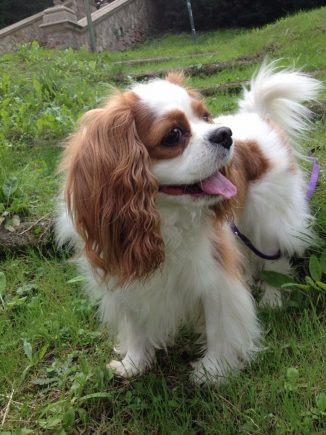 Mia was immediately put on a high dose Prednisolone treatment together with
a blood thinner (PLE can cause blood clots), B12, enzymes, probiotics and a very
low fat homemade diet. 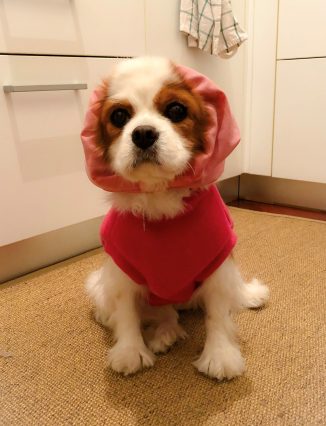 Mia responded well to treatment and her proteins level raised up to normal range;
she gained some weight, her stools were perfect and her coat significantly improved.
Luckily her liver and kidneys didn’t suffer permanent damage from the high dose steroids; she was happy and lively. WonderMia made the magic happen again! I was in Seventh Heaven and I remember I thought my special girl was really invincible!

Her specialist started to slowly lower the Prednisolone but after a couple of months
blood tests showed that albumin (protein) dropped back a little unfortunately and at that point he decided to introduce a new medication called Chlorambucil together with a low dose of Prednisolone. Mia still looked good, no clinical signs of her severe condition, and I was very hopeful that the new drug would work well on her.
But soon after starting the Chlorambucil, in early May, Mia got very bad
colitis, probably caught at the park. Her diarrhoea was awful but, more
concerning, she started refusing food and albumin dropped. 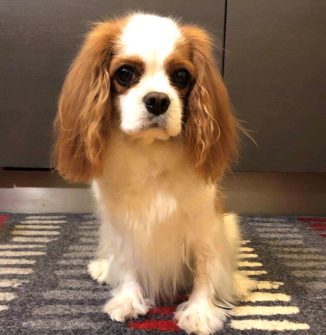 Mia was hospitalised for a week. While she was at the vet clinic they put a oesophagostomy tube into her neck to make sure she would get all the nourishment she needed as her appetite had became very selective and she sometimes totally refused to eat. The goal was to support her until the Chlorambucil started working.
Sadly, after a pretty good start after she was discharged, she was refusing
to eat more and more frequently and I had no choice other than tube feeding her four times a day. I tried all the low fat prescribed food on the market and also a more palatable homemade diet but nothing persuaded her to eat again. 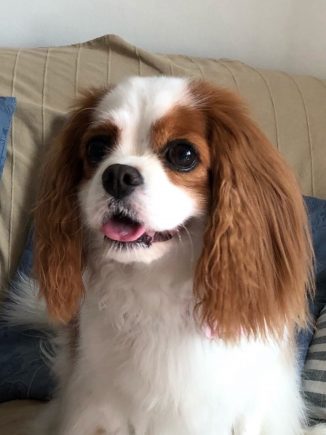 On my birthday (28th June) Mia was looking particularly weak; she had a
couple of vomiting episode and she could barely stand on her legs by that night. I rushed her to ER, they carried out tests to understand what had changed and then gave me the news that I never wanted to hear: Mia was seriously ill, her PLE had progressed despite the Chlorambucil, albumin dropped significantly and then her specialist started to suspect that her PLE had turned to Lymphoma as can happen with severe cases like Mia. My baby girl lost one kilo in just five days… There was nothing more they could do to help my girl…

I had to make the heart-breaking decision to let her go with dignity and compassion.
Mia flew away in my arms on 29th of June surrounded by all my love until her last breath. 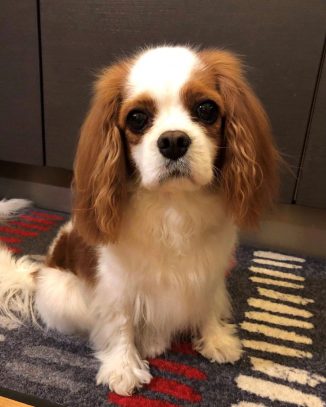 I didn’t even know what PLE was before Mia’s diagnosis and this horrible and cruel disease took my precious baby away from me in just 8 months. A prompt diagnosis and treatment could have extended her life. Mia wasn’t lucky enough to find the right specialist when the disease was at a early stage and lost her battle. I know of many other dogs that got a prompt diagnosis and went into remission for a long time. Screening and a good internist can make the difference in many cases.

Mia was not only my first Cavalier but my very first dog. She was my heart dog and
my beloved and loyal companion for almost ten wonderful years. I could never have
asked for a better one and I will miss my beloved and sweet little girl forever.

Mia couldn’t be saved but I do hope that my personal testimony will help other
cavaliers to get a prompt diagnosis and so have more chance to battle this devastating illness that is PLE.