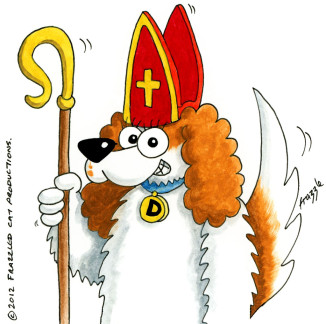 The Mitral Valve derives its name from its similarity in appearance to a bishop’s mitre.

MVD is the cause of death in many older dogs in different breeds but only Cavaliers have the early onset type. MVD afflicts over half of all Cavalier King Charles Spaniels by age 5 years and nearly all Cavaliers by age 10. Cavaliers should be screened for heart murmurs annually from the age of one.

Heart disease is commonly diagnosed in Cavaliers and the diagnosis can be disturbing and confusing for owners. The differences between heart disease and heart failure are important to recognise. With your care and medication your Cavalier will live a comfortable and longer life.

Understanding the condition will help you to help your Cavalier. 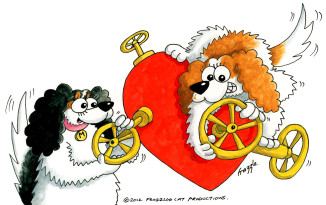 Your Cavalier’s heart consists of four chambers, two upper and two lower, and four one-way valves. The upper 2 chambers are known as the left and right atrium, which function as receiving areas for blood returning to the heart. The lower 2 chambers are known as the left and right ventricles, which are responsible for pumping the blood out of the heart and round the body. The Mitral Valve controls the flow of the blood from the left atrium to the left ventricle (upper to lower chamber).

MVD in Cavaliers and humans occurs when the folds of tissue that make up the Mitral Valve curl and shrivel so that the seal between the chambers is compromised allowing blood to flow back into the atrium. In a normal heart, when the ventricle contracts the valve is forced shut and the blood is pushed through the aorta (large artery) into the body.  In a heart with MVD, because the blood flows back into the atrium, the blood flow to the body is decreased.  As the disease progresses, the left atrium increases in size as not all of the blood is pushed out as the valve fails to close off. The left ventricle increases in size in order to pump additional blood to compensate. Fluid may also start to accumulate in the lungs as the blood backs up into the left atrium.