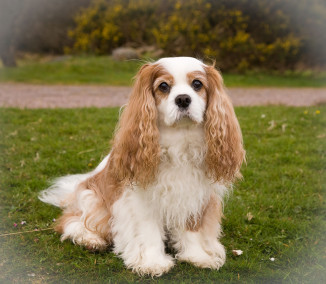 Rupert was born on 11th June 1996. He came to live with us at 8 weeks, our first Cavalier. He was a wonderful character, he loved everyone and everything and made friends wherever he went. We were lucky to find a really good, responsible breeder – she kept in touch throughout Rupert’s life, and we’re still friends now.

At the age of 2, Rupert sadly went deaf (following a reaction to the Kennel Cough Vaccine). We were working obedience and competing locally, and we switched over to hand signals and carried on, he was still able to beat Border Collies.

Later that year Rupert had an episode of neck pain – he could not pick up a biscuit from the floor, which was hard to witness in a dog who would normally hoover up the slightest crumb. He would scream if you picked him up. The vet gave him anti-inflammatories and pain killers and we made him a warm collar out of the sleeve of a jumper – these are the wrong treatments for Syringomyelia but we did not know any better at the time, this is why forums and websites like Cavalier Talk, Cavalier Matters and researcher Dr Clare Rusbridge’s site are so valuable – the Internet has become an amazing resource for disseminating information.

Rupert got better – despite the treatment – but had recurring episodes, generally about 12 months apart where he would cry when you picked him up, gradually peaking to screaming in pain, hiding away etc over a period of a few weeks. He would not want to go for a walk. In between he was amazingly well and really enjoyed his walks, playing in the garden, chasing up the stairs etc.

He had always been sensitive around the head, neck and front legs and found grooming difficult; disliked having his nails cut; did not like to play and was not as affectionate as other Cavaliers, he did not like to be picked up and cuddled – all things now which would start to ring warning bells. He would also experience mild seizures.

My vet eventually showed us a very small clipping from the veterinary press, describing a condition exclusive to Cavaliers – Squeakers and Squealers. It was thought at the time that the dogs were anticipating pain, much like we do when we have a stiff neck. Later my vet give us the web address for Malcolm Burley’s website. As you can see Rupert’s story eventually appeared on this site after I made contact with Malcolm.

At the age of 7, Rupert had a very severe episode of pain – he just stood in the kitchen, didn’t want to move, wouldn’t go out for a wee, wouldn’t lie down or anything. As he was deaf, his comfort when upset was to be stroked. Wherever we touched him on his body caused him to scream – it is the most awful noise I think I have ever heard, it goes right through you and you will never, ever forget it. It was so distressing to witness.

We managed to get Rupert into the car, sitting in a large bed surrounded by pillows and took him to the vets – really to be euthanised, as by this time we knew what the condition involved and really thought he would not improve. By the time we arrived the adrenaline kicked in and he was better. He came home with pain relief and steroids. He didn’t leave the house and garden for some weeks. When we did start going out he was very unsteady, which continued for some time. He was put onto Frusemide as well and that really helped.

He slowly regained his mobility – we tried a disabled cart but he did not adapt to it very well – I now think it was the wrong thing to do as it would put pressure on the neck and spine. He developed some urinary incontinence but this was treated homoeopathically with complete success!

We celebrated his 8th birthday with much joy 🙂

Rupert was never MRI’d but was diagnosed from his clinical signs and family history.

Sadly Rupert was attacked and pinned to the floor by a Border Collie at the age of 8 1/2, no physical damage but he was very shocked. Subsequent to this episode, his seizures increased dramatically in frequency. He was on steroids for a while and later homoeopathic remedies for seizures which helped to control the frequency and duration.

Despite his problems and our worries about him we were very fortunate to enjoy Rupert for so many years – he was generally a happy boy and a lovely introduction to this wonderful breed.

Rupert developed acute Pancreatitis at 12½ years of age – our vets did everything they could, we then brought him home and nursed him but he did not want to eat and eventually it was kindest to let him go. He left us on 12th December 2008 – breaking our hearts but so grateful that he had shared his life with us.