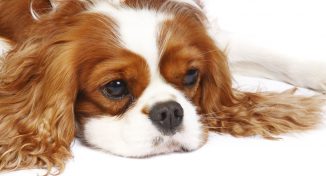 The dog has two nostrils (nares) divided by a cartilaginous and bony septum (divides the nasal cavity).

When a dog flares its nostrils to sniff, the shape of the nostril openings change allowing redirection of air into the upper part of the snout and more direct airflow to the olfactory area (sense of smell area). The slit at the side of the nares is used in the expiration of breath during sniffing. The air is breathed in through the nostrils into the back of the nose and on into the lungs.

When the septum is displaced to one side the nasal air passages are narrowed, reducing airflow which causes difficulty in breathing. If severe or combined with other features then obstructive airway syndrome may result.

This study investigates the correlation between the presence and extent of NSD (Nasal Septum Deviation ) and CM/SM (Syringomyelia).

Cavalier Matters funded the majority of the CT scans for the Cavalier King Charles Spaniels for this research.

Study population – 76 dogs with head CT (Ethics Approval: NASPA-1819-10) and known CMSM status (based on MRI and medical history). Comprising 53 CKCS (7 CM-N i.e. MRI determined breed-associated CM but clinically normal;14 with CM-P but no SM; 32 with SM); 12 Chihuahua (5 MRI and clinically normal, 7 with SM); 11 other brachycephalic toy dog breeds and crosses (10 with SM). Transverse CT of the nasal cavity in bone windows was reviewed. Presence of NSD was recorded. A previously described1 method of determining the NSD angle was attempted but was not reproducible and was abandoned. A new method – the NSD ratio was calculated (maximum distance of NSD from midline divided by distance from midline to nasal cavity wall (Figure 2).

This project was inspired by a CRA at 61st BSAVA Annual Congress (T. Hinchliffe)2 and conversation with Dr Jane Ladlow – thanks to BSAVA for enabling these forums encouraging scientific discussion and collaboration. Cavalier Matters Charity funded the CT of the majority of the CKCS. The cost of the CT was substantially reduced by Fitzpatrick Referrals thus making this research possible in the first place.